skip to main | skip to sidebar

Book Review: The Lost Summer of Louisa May Alcott 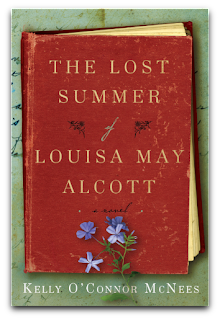 I'll be honest: I didn't have the right attitude when I started this book. Historical fiction is not my thing. It's been ages since I read Little Women, and it wasn't a particular favorite of mine, so while I had a vague sentimental notion about Louisa May Alcott and What She Means (or Should) to Me, I had never thought to wonder much what her own life had been like. In addition, I don't do well with tales that interweave the imagined with the real; I either want all imagination or all reality. Color me easily confused.

So much for judging a book by its cover: this was the first novel I've truly enjoyed in months. After slogging through things too heavy or too esoteric or too greusome, Kelly O'Connor McNees's story and prose were just what I needed. McNees does a masterful job setting the stage of Alcott's austere life under a brilliant, eccentric, controlling father; I was quickly rooting for Alcott to get out from under her father's thumb just as she wished that for herself. Although I don't remember Little Women well, the relationship between Alcott and her sisters and mother as described by McNees brought back for me details of that story that I didn't realize still resided in my brain. And the Alcott McNees brings to life is one to whom any independent woman can relate. Just as many of us do, she struggles to reconcile her ambition with her devotion to her family and to strike a balance between her practical nature and her fiery emotions.

On of the touches I enjoyed the most was that McNees has done an impeccable job of research on this story. She includes vivid details of late nineteenth century life that make the whole story shine. I could see every detail on the dresses, taste the meals on the table, and imagine myself riding in a graceful buggy to the circus. Social relationships and norms of the time were given the same attention. The depth of those details were crucial to the success of the story for me, but they never felt heavy-handed or overdone.

Sure, I can find a few things to quibble about. Alcott's father, Bronson, was insufferable. This is not McNees's fault; I'm sure her research proved this to be true, and in some ways, his character quirks were fascinating. In other ways, I felt that I understood him fairly quickly and got tired of having to be annoyed by him over and over. By the same token, Alcott's mother felt weak and her character undeveloped. I would have liked to see more of her relationship with her daughters, although I recognize that this was not central to the story. Some of the burgeoning romance felt contrived and a little forced, but overall I thought the development of the very independent Alcott's relationship with Joseph Singer was quite believable. That McNees was able to make Alcott as strong and principled as she did yet still create a romance that did not compromise Louisa's principles is an achievement.

This book was released on April 1. It will be a great summer read if you can wait that long. It's quick and enjoyable, but smart. And even if you don't think the story's for you, I'm here to tell you: you're likely to be surprised.

Read more about the author and the book at Kelly O'Connor McNees's website.

Disclosure: I received an advance proof of this book from TLC Book Tours for my review. I was not otherwise compensated for my participation in their online book tour for this novel.
Posted by Snickollet at 22:19

Oh!! Thanks for the review. I just read a quick blurb about this book yesterday. I'll place this title in my "Must Reads" column.

I definitely am going to read this! I just posted about three good
books I read last week. Cheers to reading.

Nice review. Yes, Mr. Alcott was awful. There's a museum nearby where they wintered, or at least tried to, while he was full-on doing the Transcendentalist thing. Because he completely did not understand what he was doing, the family nearly starved and had to move - no food put away, no wood chopped, and so on. But my favorite story from that place was that they were on a strict vegan diet. There was a nanny who was fired when she was discovered to have an illicit chunk of cheese in her trunk. As a friend recently said, LMA had to become "the man of the family" - no one else was going to do it.

Thanks for the review. I love finding new books to add to my ever-expanding TBR list. :)

Phew! So glad you liked it! I know what it feels like to be in a reading slump, and nothing really grabs your attention.

If I might recommend a book...have you read THE HUNGER GAMES by Suzanne Collins? If not, you totally should. You will wonder why all books aren't this good! :)

Thanks for being on the tour, by the way!

Fabulous, I love book reviews by real people. Will have to watch for this one.

Well done on the review. I rarely am moved to read a book based on a review, unlike a movie where all it takes is a Rotten Tomato score above 80%. Anyway, I'm intrigued and will try to read this soon.

Thanks so much for the thoughtful review and to everyone who commented, for their enthusiasm! It's so fun to hear from real people. Hope I have the chance to meet you someday!

Thanks for stopping by. I just corrected a typo in one instance of your name in the review--sorry about that!

klhp beat me to it - I was also going to recommend March by Geraldine Brooks. I'm pretty sure you read People of the Book by her, yes? I really enjoyed March, but I had never read Little Women so I read that first so I had better context for it (I'd only seen bits and pieces of the movie).

I'll have to check out The Lost Summer of Louis May Alcott. As a history major I love this kind of stuff. :)

Dude, somebody else told you about March. Two somebodies. I echo their praise - completely, absolutely, unabashedly loved it.

Cool! I liked Little Women. I also read many of her other books and enjoyed them. That will be a fun one.

I saw a recent PBS American Masters about her that covered much of the same territory. Very interesting...I remember reading a number of her books when I was young.

Snickollet
I'm a mother and a widow, and a whole lot of other things. Here, though, I tend to write about parenting, grief, and their intersection.

I love to hear from readers.

You know who I am. Who are you?